TINTON FALLS – The trio of Chase Boyle, Mia James and Ava Poupard combined to score 244 goals for the 2021 state champion Rumson-Fair Haven girls lacrosse team. With all three off to Division I college lacrosse, it would have been acceptable to assume a young RFH team in 2022 would look to gain experience and rebuild, not reside at the top of New Jersey girls lacrosse again.

But the young talent on coach Amy O’Keefe’s team has serve noticed that it’s not a rebuild, but a reload of the Shore’s most dominant girls lacrosse team over the last decade. Rumson had an impressive 10-7 win at Trinity Hall April 21 to seize the top spot in the Shore Conference with postseason play a couple of weeks away.

The Monarchs ended RFH’s nine-year, 129-game Shore Conference winning streak in 2021, but RFH got revenge by beating Trinity in the Shore finals as well as the Tournament of Champions. A matchup of two defending state champions saw the young Bulldogs show plenty of bite against a seasoned team.

Freshman Rachel James was the youngest player on the field but looked like a hardened veteran playing against older elite competition. While James was getting her first dose of the new Shore Conference girls lax rivalry, she was more than familiar with the stakes. Rachel’s older sisters Mia (Princeton University) and Cassie (Monmouth University) were cornerstones of RFH’s success over the last six years.

Her lightning-quick footwork stands out but more impressive is her remarkable poise. Two days earlier she delivered the game-tying goal against Manasquan and a few moments later would step out of a double team and fire a perfect pass to Elliott Van Nice who scored the difference maker in a 9-8 win against the Warriors.

In the Trinity Hall game, James was able to pick her spots to attack the net as well as get her teammates involved. A four-goal, four-assist effort from the freshman announced that Rumson’s young talent isn’t going to be overwhelmed in big plays.

Sophomore Abby Boyle is the team’s fourth leading scorer with 16 goals but her biggest value comes on faceoffs where she has amassed 83 draw controls. With possession so critical, Boyle gives Rumson a huge advantage. Juniors Jackie Braceland and Van Nice have joined James and Boyle as scoring options and fill the massive void left by RFH’s stellar 2021 senior class.

Trinity Hall is still going to be a contender for a second straight state title in the non-public ranks and, despite a season-ending injury to Haven Dora, the Monarchs turn their attention to getting revenge on RFH in the upcoming Shore Conference Tournament where there could very well be Chapter Two of the new girls lacrosse rivalry.

This article originally appeared in the April 28 – May 4, 2022, print edition of The Two River Times. 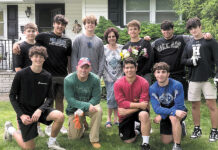 Holmdel Football ‘Cleans Up’ in the Off-Season 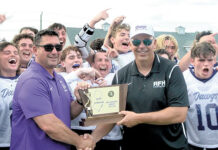 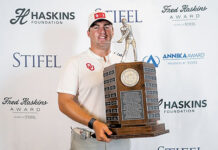