UNION – It seems like something special happens whenever Shore Regional takes to the turf at Kean University. Over the last eight years, the Blue Devils girls soccer team has won five state championships, often with a flair for the dramatic; in 2017, they won with just 10 seconds left in regulation. Now, for the second time, a golden goal has given Shore a championship trophy.

Ava Agresti’s goal in the 95th minute gave Shore a 3-2 over time win against Mountain Lakes in a rematch of the 2019 Group 1 state finals. Two years earlier, the Lakers topped Shore but a senior-laden class made sure the Blue Devils ended up on top in the final high school soccer game of the 2021 season. “It means the entire world to us,” senior goalkeeper Parker Grimm said. “I personally have wanted this since we came here two years ago and didn’t come out with the win but I’m extremely excited that we were able to this time.” For 60 minutes it appeared that Mountain Lakes was destined to make it two straight championship wins over Shore. Grimm made a finger tip save in the first half that went off the post and later stopped Bucknell commit Henna Andican from point-blank range to keep the game scoreless at the half. Andican was fouled inside the 18 to earn a penalty kick which she converted in the 51st minute. Five minutes later freshman Daisy Duda delivered a beautiful service on a free kick from 40 yards out that Andican headed home for her 35th goal of the season to give the Lakers a 2-0 lead.

Things looked bleak for Shore until Mia Agresti sparked an amazing 37 seconds of soccer. It started with the senior on the corner kick sending a high curving ball to the far post. Barbara Grimm was able to get a shoulder on it and direct it into the net to get the Blue Devils on the board. Right after the goal, Mia received a short pass from younger sister Ava and dribbled down the middle of the field. From 30 yards out, she blasted a shot into the upper right corner for a spectacular goal that evened the match 2-2 with 16:44 remaining. “We knew the other team went downhill from there,” Mia said. “The energy went up so much after the first goal and we just kept going.” Rain fell at Kean to star t over time but it didn’t slow Shore’s relentless attack. Lauren Saponaro delivered a pass from the right wing.

Ava Agresti won the battle for the ball with a Mountain Lakes defender right in front of the net and was able to shoot it between her legs and into the net for the golden goal. Sisters were a theme in this championship game and the successful 2021 Blue Devils season, with Parker Grimm in goal and twin sister Barbara scoring the first goal, to the Agresti trio of senior Mia and sophomore twins Amelia and Ava delivering a special moment for the family. “It was just so much excitement,” Ava said. “To work with both my sisters, my sister (Mia) is a senior and I have a twin sister (Amelia), I’m just so excited we finished it of f happy.”

The article originally appeared in the November 24 – December 1, 2021 print edition of The Two River Times. 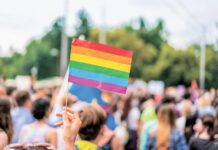 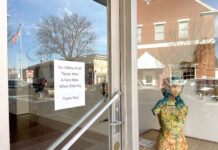 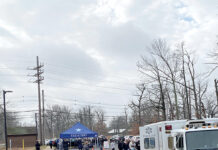