Grab a mug; it’s time for a hot chocolate break! Or is it hot cocoa?

You may be using the terms interchangeably – as do most Americans – but technically there is a significant difference: hot cocoa is made with cocoa powder; hot chocolate is made with, well, chocolate.

Whatever you call it, there is no argument that it’s delicious on a cold winter morning, after a day on the slopes or while snuggling in front of the fire watching a holiday movie.

Hot chocolate has its origins in Spain and what is now Mexico. Experts say the Mayans served a cold drink made from ground up cocoa seeds, water, cornmeal and chili peppers as early as 500 B.C. Fast-forward 2,000 years to when the Spanish conquistador Hernán Cortés invaded, causing the fall of the Aztec Empire. He returned to Spain with, among other items, cocoa beans and the method for making “drinking chocolate.” Credit the Spaniards with opting to heat and sweeten the drink, bringing it closer to the beverage we know now.

By the 1700s the confection had reached London where cafés opened to serve the special drink. It was often touted as a medicinal treatment for digestive issues. Hans Sloane, a prominent physician and naturalist, is credited with adding milk instead of water to hot chocolate. He brought the recipe, dating to the late 1400s, back from Jamaica, where they boiled milk and cinnamon with freshly harvested cacao, according to Smithsonian Magazine.

In the 1800s Cadbury began selling tins of drinking chocolate which eventually led to the ubiquitous packets of powder available at grocery stores now, which barely resemble the hot chocolate of old.

As easy as it is to rip open a packet and add hot water, it isn’t too much more complicated to make hot cocoa or chocolate from scratch. And the results are so much tastier, you’ll be happy you took the time to do so.

Since there are so few ingredients in a hot chocolate or hot cocoa recipe (milk and chocolate or milk, cocoa powder and sugar), the best cup will start with high-quality products. Invest in a cocoa powder with a little more fat which adds flavor; brands can vary widely in fat content and acidity so try a few and see which you prefer. The best cocoa powders for hot chocolate are Dutch-processed, meaning after the cocoa butter is removed from the beans during processing, an additional step is taken to neutralize the natural acidity.

Quality cocoa powders include ones from Droste, Valrhona, Barry and Callebaut. They will be more expensive than supermarket brands, but they are worth the price.

The same can be said for chocolate bars. While dark chocolate yields a rich drink, going too dark can mean a bitter beverage. For authentic Mexican-style hot chocolate, use Ibarra brand chocolate para mesa (table chocolate) specifically made discs for dissolving in milk. If you prefer milk chocolate, go for it. Or try a mint chocolate bar for a taste of Christmas without the peppermint extract. The better the bar, the better your final product.

One thing to remember: hot chocolate made with a bar thickens more than hot cocoa, becoming a delicious, decadent, rich experience. How long you heat the mixture after adding the chopped chocolate to the warmed milk will determine its thickness. No additional heat and you will have a sipping consistency; a little more heat and you will have something akin to a dipping sauce for cookies or churros; more heat and it can get so thick you need a spoon to eat it. Steer clear of any chocolate over 70 percent cocoa solids or you may need to add sugar to make it palatable.

And once you’ve mastered the basic recipes, feel free to experiment. Take what is often considered a kids’ confection to an adult level by adding a few drops of your favorite spirit. Brandy, bourbon and peppermint schnapps are all good choices, stirred in once you’ve removed the mixture from the heat. Cinnamon, cardamom, nutmeg and even a pinch of cayenne pepper can add warm and spice that harken back to the treat’s origins. Get out a kitchen torch – a $20 investment that you will use more than you think – and scorch some store-bought or homemade marshmallows for a summertime s’mores experience in a cup.

Whatever you choose, during the cold winter months, there’s no wrong time for hot chocolate (or hot cocoa).

Measure milk into a small saucepan. Heat slowly over medium-low until bubbles just form around the edges. Do not let the milk boil. Alternatively, pour milk into a microwave-safe measuring cup and warm until hot.

Meanwhile, place cocoa powder and sugar into a mug. Add the boiling water and stir with a small whisk until the sugar has dissolved and the mixture resembles hot fudge sauce or a thick syrup.

Pour the heated milk into the mug and whisk rapidly until the cocoa mixture is fully incorporated and there is a slight foam on top.

Serve immediately topped with whipped cream or marshmallows, if using.

Servings: 2-4, depending on how you are serving it
1 cup (8 ounces) whole milk
2 ounces chocolate, any flavor, chopped
Cinnamon, optional
Coarse sea salt, optional

Pour the milk into a small saucepan and heat over medium-low until bubbles just begin to appear around the edges. Add the chopped chocolate to the milk and stir gently with a rubber spatula until the chocolate is full melted and the mixture is homogenous. You can stop here and pour into mugs to serve or return to the heat and bring the mixture up to just barely a boil. Stir continuously for 2-3 minutes, until it begins to thicken. The longer you heat it, the more it will thicken. Be careful not to turn it into pudding!

Remove from heat and stir in a pinch each of cinnamon and salt, if using.

The article originally appeared in the December 16 – 22, 2021 print edition of The Two River Times. 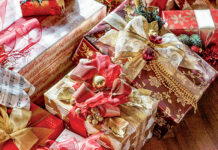 Is That Gift Wrapping Recyclable? Probably Not. 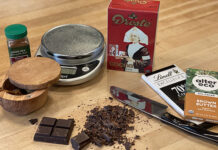 Warm Up With Something Hot and Sweet 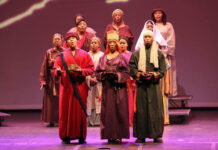