There are a number of restaurants in the Two River area situated in serene and beautiful settings. Does the food taste better while gazing at a river, ocean, beach or mountains? Quite possibly. So, what do you do when your restaurant is located in a shopping center overlooking an expansive parking lot and a Home Depot?

This was the challenge confronting Sam Sitten and Kimberly Jeanette when they were offered the vacant storefront next to their Sprig Market and Cafe, where they were serving on-site casual foods and take-home items. Their desire to open a fine dining destination motivated them to lease it and create an environment which transports you to a warm and comfortable dining room that is a world unto its own. Once you are seated inside this new addition to Sprig, you become enveloped in the tasteful setting and forget all that is outside. Chef/co-owner Sitten covers the kitchen, while co-owner Jeanette sees to the front of the house. So smooth and polished was the service and ambiance that we did not realize that this dining room addition to Sprig Market+Cafe had only been open for three days!

From the appetizer section of the menu, two diners chose Crab Cakes ($20), which arrived with a spectacular cranberry relish, apple butter (a concentrated form of apple sauce), baby greens and a miso glaze. The large, plump crab cake had almost no discernable filler, and was juicy and moist. The cranberry relish was also remarkable. This appetizer is highly recommended.

Another of my guests opted for the thick and creamy Butternut Squash Soup ($15), which was mixed with generous chunks of lump crabmeat. This unexpected combination of flavors worked very well; biting into the crabmeat intermixed with the roasted squash was delicious.

There were several interesting-sounding salad choices and we selected two: Roasted Pear ($16) which included two thick pieces of roasted pear plated with julienned Manchego cheese, arugula, radicchio and toasted almonds, dressed with a port wine vinaigrette, which was very good; and Roasted Brussels and Acorn Squash ($16) which paired diced butternut squash, halves of roasted Brussels sprouts, diced apples, hazelnuts, pumpkin seed oil and mustard vinaigrette. It made for a nice combination of flavors and textures.

An entree of Pan Seared Salmon ($32) sitting atop a very generous portion of butternut squash risotto was garnished with braised leeks and dressed with an apple cider vinaigrette. My guest was so taken by the squash risotto, and ate so much of it, that she was barely able to finish the large square of salmon. Maple Vinegar Chicken ($32), uniquely coated with cranberry almond panko crumbs, sharing the plate with oyster mushrooms and slices of pickled papaya, sat on a bed of pecan wild rice, and was sauced with a whiskey demiglace. This was deemed very delicious and not to be missed.

A large serving of chunks of Duck Breast ($38) also sat on that tasty pecan wild rice, alongside a mixture of diced roasted squash, pear, shallots and turnips, with a dollop of tangy cranberry sauce. The only disappointment was that the duck had stayed on the heat a little too long, so it arrived medium instead of rare as requested.

There was no issue with the degree of doneness of the Bronzini ($32). The good-sized, skin-on filet of fish was properly juicy and moist. It arrived with a puree of celeriac, a mix of chopped roasted Brussels sprouts, apples and hazelnuts, and a caper butter sauce.

In addition to its extensive regular menu, Sprig also offers a dairy-free, plant-based, “All Vegan Dinner Experience” with a choice of appetizers such as Artichoke Arancini, entrees including Handmade Roasted Pumpkin Ravioli and desserts such as Chocolate Cake.

We enjoyed the BYO aspect of the restaurant and opened a white wine from right here in New Jersey: 2020 Cape May Winery Albarino. This take on a Spanish/Portuguese wine had notes of peach and pear and a bit of refreshing acidity. We followed that with a Batzella Vox Loci Syrah, a red from Tuscany, which was juicy, with lots of red and black fruits on the nose and soft tannins. We also shared another Italian red, 2013 Proprieta Sperino Uvaggio, a Nebbiolo-based wine from the Piedmont region that was drinking well now, but will provide a number of years more of pleasure.

For dessert, we led off with a well-made Bread Pudding ($14); the brioche paired with maple bourbon pecan and vanilla gelato. The combination was not too heavy and a nice finale to our meal. However, it was important to acknowledge the fall theme, so we also opted for Warm Spiced Donut ($14) which was artistically plated, sitting on a bit of apple butter with a scoop of pumpkin spiced gelato on top and a leaf shaped chocolate tuile rising straight up from the gelato. Sinfully delicious! The gelatos were so good we “forced ourselves” to try a small sampling of the other homemade flavors as well as some sorbets that were also offered that night.

For a restaurant which had only been open a few days, Sprig Market+Café showed a high degree of professionalism in the kitchen and provided warm, attentive service in the comfortable dining room. We will return soon to explore the menu further and, once again, escape the outside world.

Bob Sacks, longtime food and wine buff, writes about food, wine and restaurants in this column. Follow him on Instagram @dinnerwithbob. 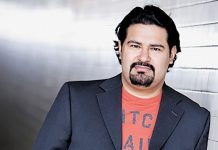 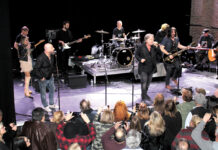 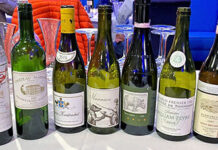