You would be hard-pressed to find a more decorated athlete at the top of their sport than Fair Haven’s Megan Douty. A two-time lacrosse All-American and national champion at the University of Maryland, Douty has been a defender for the U.S. National Team for the last seven years, winning a gold medal in the world championship in 2017 and looking toward defending the title in 2022.

In the midst of playing at the highest level of the sport, Douty has built a youth lacrosse program that is helping develop some of the area’s top high school lacrosse players. Douty and former Monmouth University standout Alex Marino have seen All Lax grow into a travel program that is quickly creating college opportunities for young athletes in the area. The Trinity Hall duo of Paige Nolan (University of Pennsylvania) and Mary Kate Allingham (Mount St. Mary’s University) are two local commits on the All Lax Class of 2022 team; the 2023 squad features Red Bank Regional’s Paige Kelly and Rumson-Fair Haven’s Kayse Kiernan who will begin their recruiting Sept. 1.

Following a six-week season that featured All Lax playing in front of college coaches across the country, Douty is currently competing in the Athletes Unlimited professional women’s lacrosse league in Maryland. The Two River Times caught up with Douty to talk about the newest venture in women’s pro sports and the importance of developing the next wave of lacrosse stars in the Two River area.

The Two River Times: You’re in the midst of playing in Athletes Unlimited’s pro league. It’s a new and unique way to approach pro sports in women’s lacrosse. What are your impressions of the format?

Douty: The league is a new take on women’s sports entirely. Each week we are drafted to a team, so we are always with different people. We compete in three games over the weekend and compete for points as a team and as an individual. The mantra of Athlete’s Unlimited is “Every Moment Counts.” I think the league is very exciting, super-fast paced, and gives a new competitive edge to our game. It has been very fun to play and compete at this level with so many great players and athletes.

TRT: You have the perspective of seeing the sport as a national team member, a professional and leading young prospects in travel lacrosse. How has the sport grown since your playing days both in numbers and level of play?

Douty: The game has evolved exponentially since my playing days in high school, to college, and now at the professional and national levels. More girls are playing the sport, more colleges are adding women’s lacrosse, giving so much more opportunity for athletes to play at the collegiate level. Also, the game itself has evolved. New rules have been implemented to keep the game competitive and exciting, such as the shot clock, free movement, self-start, running through the crease, etc. It has been so incredible to be a part of the evolution of this game, a pioneer of the sport.

TRT: You have established a strong foundation at All Lax along with Alex Marino. You are getting a chance to develop players leading up to the high school level and college opportunities. As someone who is playing at the top level of the game, what have you used from your experience to build a successful youth program?

Douty: We have been incredibly lucky to have had such success over the last 5 years in our company All Lax. It has grown from what was just camps and clinics to a competitive club team known by so many. My experiences playing at the highest level with some of the best players and coaches to ever play the game have given me so many tools to pass to the next generation. Every time I step on the field, I hope to inspire my All Lax athletes that anything is possible if you are willing to work for it. Our ultimate goal is to use lacrosse as a vehicle to develop these girls into strong independent women and to prepare them for what is to come next, whether it is the next level of lacrosse or the next chapter in their life. The community we have built at All Lax is like no other, we truly have the most special group of athletes and coaches that are incredible role models for the next generation of female athletes in our community.

TRT: Every athlete in Athletes Unlimited has a chance to earn money for charity. You chose to compete for Play 4, a nonprofit formed by one of your players on All Lax. What kind of inspiration do you get playing for a cause that is tied directly to one of your players?

Douty: We are so lucky to have the opportunity to play for something so much bigger than ourselves through Athletes Unlimited. As I stated earlier, our All Lax athletes are so special and are leaders in their own right in our local community. During COVID, one of our athletes, Elliott Van Nice, shared with us that she was starting a nonprofit because she was passionate about making a difference in the world. Her passion for helping underserved communities left a mark on me, and as soon as we were offered the opportunity to play for a nonprofit that we had a special connection to, I knew this was the perfect way to help Elliott on her mission. It is truly special to know that every time I step on the field I am playing for an amazing foundation while simultaneously helping someone that has become like family, sharing her mission.

TRT: Rumson-Fair Haven and Trinity Hall won state championships this year. As someone who has seen North and South Jersey dominate girls lacrosse on the high school level, how big of a moment was it to see our area win two of the six state titles in New Jersey?

Douty: It is so incredible to see how much the sport has grown in the state but more specifically our area. We have two of the top programs in the state, in each other’s backyard, competing and beating some of the best programs in the state and country. The growth has certainly put these schools on the map and giving us a great reputation in the high school lacrosse world.

TRT: The Summer Olympics just came to a close. As a member of the U.S. National Team, what have you been hearing about lacrosse getting the chance to finally get its spot on the world stage in the Olympics?

Douty: As I mentioned before, it has been incredible to be a pioneer of the sport and watch the game evolve over time while still competing. We are slowly reaching our goal of getting lacrosse into the Olympics and do foresee this happening come 2028 with the new discipline of 6’s. This format will have 5 field players, 1 goalie, and a shortened field. It will play similar to basketball where all players will play offense and defense, and after a goal, there is an immediate goalie clear. It should keep the game competitive and fans interested, from all countries! 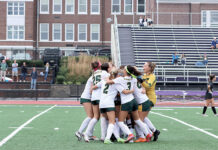 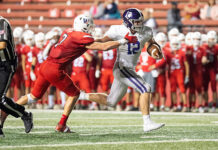 RFH Rumbles on the Raritan With Dominating Opening Win Over Wall 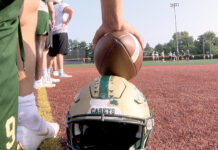 Inside Training Camp with RBC Football