RUMSON – It’s been a long time since the Rumson-Fair Haven girls lacrosse team lost a Shore Conference game. To put it in perspective, the last time RFH lost in Shore Conference play – May 10, 2012 – Barack Obama was president, there was a new movie called “The Avengers” in theaters and Maroon 5 topped the charts with “Payphone.” There was also an announcement of a new social media app called Snapchat.

Trinity Hall didn’t exist in 2012 but the Shore’s all-girls school has quickly established itself as an elite lacrosse program. The Monarchs’ quest to topple Rumson was thwarted by the pandemic-canceled 2020 season: They finally got their shot in front of a spirited crowd at Borden Stadium and Two River Times field.

RFH is experienced in the big game while Trinity Hall was a perfect 8-0 but still flying under the radar. Wins over Pingry and Montclair Kimberly Academy proved their Top 10 state ranking was justified but the true test would come against the Shore superpower.

The script to this game seemed to be written like so many RFH close games in the past. The Bulldogs had a game plan to neutralize Trinity’s top player and lean on its leaders to pull away to victory. RFH’s Mia James took on the task of slowing down Trinity Hall’s Haven Dora who came into the game with 42 goals. The two players will be teammates in college at Princeton University.

With Dora held scoreless, Trinity Hall had to rely on its other scoring options in the high stakes game.

Junior Paige Nolan and sophomore Peyton McGuire stepped in to provide all of the Monarchs offense. Tied 3-3 at the half, RFH scored two straight goals capped off with Chase Boyle’s tally from the free position to take a 5-3 lead. Boyle, one of New Jersey’s top overall players, was taking control of the game.

A save by goalie Isabelle Darman slowed Rumson’s momentum allowing the Monarchs to draw even on goals by McGuire and Nolan, tying the game at five.

The rest of the game would see RFH take the lead and Trinity Hall find a way to draw even.

It was not a surprise to see Nolan step up. The junior committed to the University of Pennsylvania has been the 1-2 punch with Dora all season long.

Sophomore McGuire had her first chance to show her pedigree as an elite prospect in her first season of varsity lacrosse. While new to the high school game, she has been playing travel lacrosse at Jersey Shore Select and was selected to the prestigious Under Armour 150 last summer. In a game filled with college talent on the field, McGuire showed calmness when she had the ball on the offensive end, not rushing shots and patiently waiting for her time to strike.

McGuire’s third goal of the game tied the score 6-6 with three minutes to go, setting the stage for the late-game drama.

With James and Dora locking horns for the entire game, both star players were quiet on the scoresheet. But James broke through with a rising shot that scorched the high part of the goal while she fell violently on the turf. With 4:52 to go, RFH was back in front 7-6.

The biggest moment of the game came when Nolan matched up with Boyle behind the net looking to tie the game. As Rumson goalie Kayse Kiernan made the save, Nolan fell hard to the turf. The referees came in and called a yellow card on Boyle, sending her off for two minutes with just 2:15 left in regulation. With Rumson’s leader on the sidelines, Nolan took advantage by immediately scoring on an 8-meter shot to tie the game.

Rumson gained possession of the draw with a chance to take the lead until the Monarchs’ general made one of the biggest plays of the season; the history books will show Haven Dora with no goals and no assists but her impact was seismic.

The junior executed a perfect stick check to jar the ball loose and was able to gain possession.  After playing catch up the entire second half, all of a sudden Trinity Hall was poised to take the lead.

Mary Kate Allingham lofted a high pass that went off a stick and right into the webbing of Peyton McGuire who was right in front of the goal and quickly fired the biggest goal in Trinity Hall lacrosse history.

“It felt amazing,” McGuire said. “I couldn’t have done that without my team. They mean so much to me and we play so well together and I value that as a Trinity Hall Monarch.”

McGuire’s game-winner came with 1:32 left and the Monarchs were able to gain possession on the ensuing draw to run out the clock.

Everyone on the field was in elementary school the last time Rumson lost a Shore Conference girls lacrosse game and Trinity Hall was well aware of what they accomplished. McGuire and Nolan each scored four goals to account for all the Monarchs offense in the 8-7 win.

“I still can’t believe it,” Nolan said after the post-game celebration. “This was our goal since our season ended last year because of COVID. This is a game we’ve been looking forward to and I just can’t believe we won.”

The disappointment of the loss and the fact that there will be a chance for redemption in the Shore Conference Tournament shouldn’t take away from one of the truly remarkable streaks in local high school sports. Rumson’s 127 straight Shore wins will be nearly impossible to duplicate. It lasted nine years and three days.

“I’ve played Rumson since we’ve started and it’s always been kind of one-sided,” Trinity Hall coach Dana Lenneper said. “I respect their program, I think that they have a great coach and a great team. We knew it was going to be hard but these girls have worked so hard. We’ve been waiting for this. It’s been a long time coming.”

Trinity Hall may have been flying under the radar but not anymore. The Monarchs already have a Prep “B” state championship and will be the No. 1 seed in the upcoming Shore Conference Tournament and a top seed in the state playoffs in June.

It feels amazing,” Dora said. “We’re a great team and I don’t think anyone knew but tonight and from now on they’re going to know who we are.”

The article originally appeared in the May 20 – 26, 2021 print edition of The Two River Times. 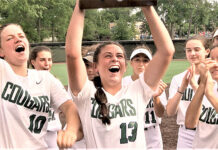 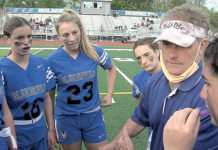 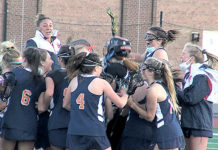